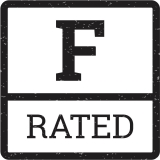 Developed by Bath Film Festival and now expanding across the UK, the F-Rating is a new film rating which highlight films made by and featuring women.

The F-Rating is applied to all films which are directed by women and/or written by women. If the film also has significant women on screen, it receives a TRIPLE F-Rating, our gold standard.

The F-Rating exists to shine a light on the amazing work that women are doing in film. By championing their films, we can encourage critics to review them, inspire audiences to watch them and ultimately influence studios to fund more female film-makers. This classification provides an easily identifiable label to enable moviegoers to vote with their seat and support women in film.

Currently, 32% of the films on the artfilm.ch streaming platform are F-Rated or Triple-F-Rated